A colleague of mine recently reminded me that, during the Cold War, nuclear physicists in the Soviet Union and the US continued scientific exchanges. In the opinion of some, these exchanges were critical to the eventual diplomatic agreement between the two countries regulating nuclear armaments.

Academics can easily build bonds with those working in the same knowledge domain, regardless of where they live. Sometimes these encounters take place in professional conferences, where those from several countries describe their work to one another. This free sharing of work is motivated, of course, partly by the selfish desires of individual scholars to obtain praise from the peers, but also by the obligatory acknowledgement of the dependence of one’s own work on the prior work of others. Cross-national dependencies and collaborations are common.

Ignorance about this sharing culture can lead to misinterpretations of comparisons across countries in scholarly activities. For example, a recent report compared countries on inputs and outputs of investments in research.  The first figure below plots national expenditures on research and development between 1981-2015 for major groupings of nation-states. The United States leads in expenditures (adjusted for purchasing price differences) throughout this period, but in the last 10 years the rate of increase by China is much higher than all countries. 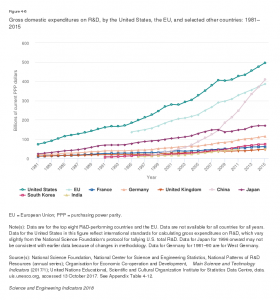 In one sense, the first graph reports financial inputs to the research and development sector of the societies. The second graph reports one output – the number of peer reviewed articles in science and engineering fields between 2003-2016 (the last few years of the first chart). Here the European Union leads for every year, but the rate of increase for China again exceed other countries in the past few years. China passed the US in number of articles in 2016. 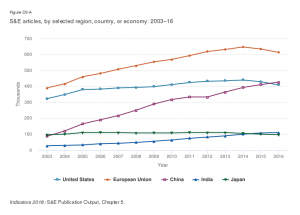 With the perspective of competition among nation-states, it’s tempting to conclude that the US is “losing” in knowledge production across the world. A nationalistic reaction to such information is, however, myopic.

Such a reaction, I believe, ignores two attributes of academic research. First, the rewards of individual academic scholars derive from wide dissemination of their work. They seek broad sharing; they revel in reactions and praise of their work by others; they carefully monitor the impact of their work on others. Hence, the work of one country’s scholars is available to all. Knowledge is freely shared globally. The “profits” of higher scientific volume cannot be retained only by the country of the scholar. Second, as the story of the nuclear physicists in the Cold War illustrates, many scholars thrive on collaboration and collegial interchange. They don’t conceptualize their work as part of the national production of knowledge or an advancement of proprietary value but rather part of the product of a global group of scholars working in a similar area. These groups form inter-nation ties that are strong.

In a world where conflicts between countries may arise, academic exchanges and scholarly collaborations become even more important. Investment in research is not just good for a country that invests, it’s good for the world and the ties among societies.

Connect with us via: